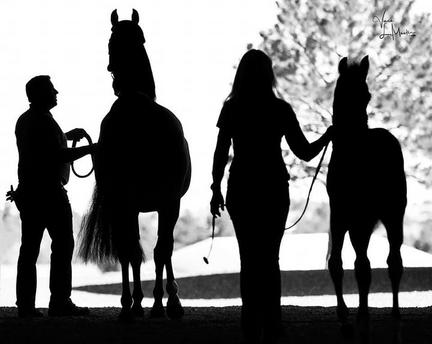 Stacey Kipper-Perrelli was born and raised in the Denver area in Colorado.  Her passion for horses started with her grandad's horse, Pal, in a little town in Southeast Kansas.  Her love for American Saddlebreds started in 1987 at Gait House Stables riding camp where she found her first Saddlebred, Adam Smith.  From there Stacey took lessons at various Saddlebred farms across the country, competing on a National level.  She also catch-rode many juvenile prospects for other owners trying to sell their mounts.  At the age of 16, Stacey was training horses for others and apprenticing under some of the industry's best trainers, always careful never to take money so not to jeopardize her amateur status.  Throughout her show career, Stacey has remained an amateur, but is looked upon as one of the most prominent amateurs in the Saddlebred industry today.  Spring Acres Farm was Stacey's creation.  Under the banner, she has trained and shown her own horses since its inception in 1995.

Scott Perrelli was born in New Haven, Connecticut where he lived until he was 7 years old.  From there he moved to Duluth, Minnesota where he spent the remainder of his youth.  It was in Duluth that he was introduced to American Saddlebred horses.  In 1985, at the age of 13, he started working at Birchwood Farms.  From there his passion for Saddlebreds continued, moving him from place to place and barn to barn, gaining valuable experience.  He wound up in Kentucky were he trained under some of the industry's most prominent professionals and eventually owned his own stable.  In 2013, he married Stacey and moved to Colorado where they work under the Spring Acres Farm banner together.

Founded in 1995, Spring Acres Farm is a private family farm with an objective to breed and raise American Saddlebred Show Horses.  Our current facility was built in 2016 and is located on 40 acres in Parker, Colorado.  The barn itself was an idea scribbled on a piece of paper over 20 years ago.  Today it is truly a dream come true!